Ragini Dey's father worked for an Indian airline company, Ragini was born in the city of Mirzapur, Northern India. Her family travelled extensively so they experienced food from many different Indian regions and experimented with different recipes. Ragini says their family was quite unconventional because they loved to try new and different foods unlike many Indian families who cooked only the food of their region. English food was a specialty, especially puddings and Ragini remembers the first thing she cooked at the age of 8 was a "Queen of Puddings" from Mrs. Beeton's cookery book.

Most of Ragini's life was spent in Delhi and after graduating with honours in Political Science Ragini asked herself if life in the civil service was what she really wanted. In fact, what she really loved was food and travel. She studied hotel management where she met her future husband, a chef and they moved to Mumbai where Ragini obtained her teaching qualifications and within a short period was working as department head at a catering school. Ragini says chefs always have itchy feet and it wasn't long before her husband landed a job with the Hilton Hotel in Adelaide so with virtually no money they moved to Australia. Here in Australia Ragini was told she needed to be executive chef of her own restaurant for 10 years before she could teach cookery, so she found herself a job with South Australian cookery identity Margaret Kirkwood at the Gas Company. It wasn't long before Indian cookery was added to the classes and Ragini taught them for nearly 8 years. She also taught with the WEA for 26 years. In 1983 Ragini also worked as a cook at South Australia's Government House during the time of Sir Donald Dunstan and before long Sundays great Australian roast became the great Indian curry! Ragini even cooked for Sir Donald Bradman. For eleven years Ragini cooked at a retirement village where they were surprised that she cooked every meal from scratch - Jam Roly Poly was a bit of a speciality. It was during this time and with two small children that Ragini started her Indian takeaway "The Spice Kitchen". It was such a success that it expanded to include Indian cooking and spice appreciation classes and became renowned for making everything from scratch in the restaurant - right down to the pickles, chutneys and the spice mixes. Ragini has also published two cookery books and her restaurant has won numerous awards including the national "Best Indian Restaurant" award in 2009. Ragini continues to create innovative modern Indian cuisine based on centuries-old recipes and traditions.

​Ragini Dey was born in the city of Mirzapur, Northern India. Her family travelled extensively through India experiencing food from many different regions and experimenting with different recipes. Ragini graduated in political science in Delhi before moving to Mumbai to work in a catering school. She emigrated to Australia after her husband accepted a job with the Hilton Hotel in Adelaide. After several years teaching and cooking Indian food for establishments such as South Australia’s Government House and dignitaries including Donald Bradman, she eventually opened Indian restaurant The Spice Kitchen. It was such a success that it expanded to include Indian cooking and spice-appreciation classes and became renowned for making everything from scratch, right down to the pickles, chutneys and spice mixes. Ragini Dey is now considered one of Adelaide’s finest chefs. Spice Kitchen when directed by Ragini Dey had received several awards and accolades.
Media
The Australian October 30th 2020
Another whose food is so much a part of the Adelaide experience is Ragini Dey, a diminutive Mirzapur-born chef, teacher, spice-flogger, author and all-round dynamo, turning up at festivals, cooking classes, catered events and of course cooking in her simple Indian cafe Ragi’s Spicery. The best Indian food I ever ate was at her old place, Dhaba at the Spice Kitchen – again in the ’burbs – but sadly it closed. Never mind. We cook from her lavish Spice Kitchen all the time, and now she’s done a new, self-published, spiral-bound, “write notes all over it” quickie called Everyday Indian. It’s the antithesis of Parwana (Murdoch Books): no pics, virtually no text, barely an index to speak of. Just very good recipes.
JOHN LETHLEAN FOOD WRITER 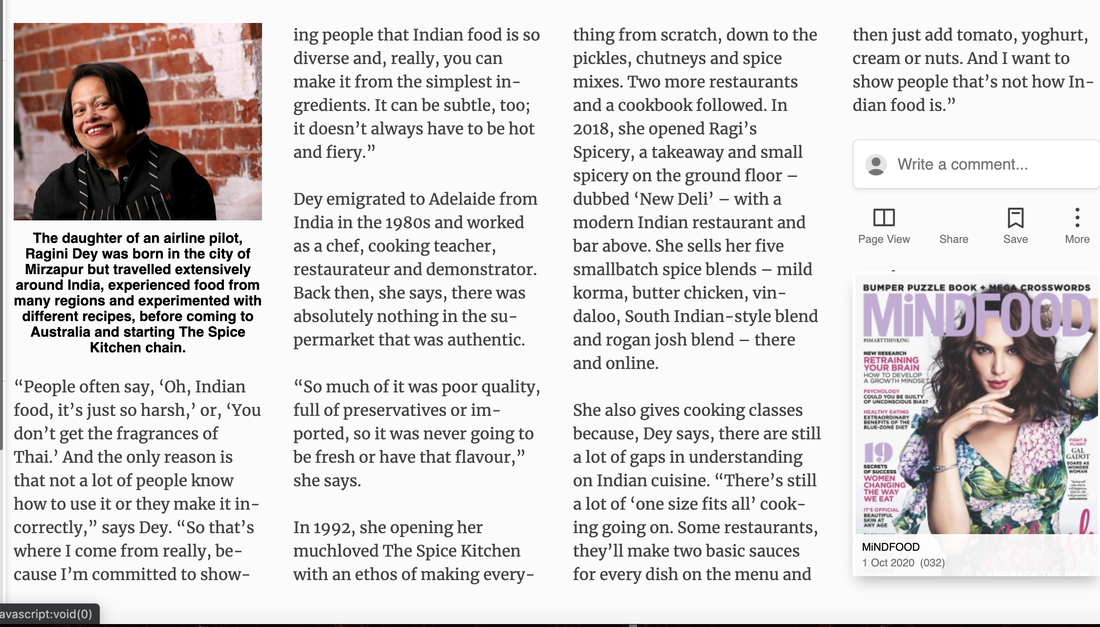